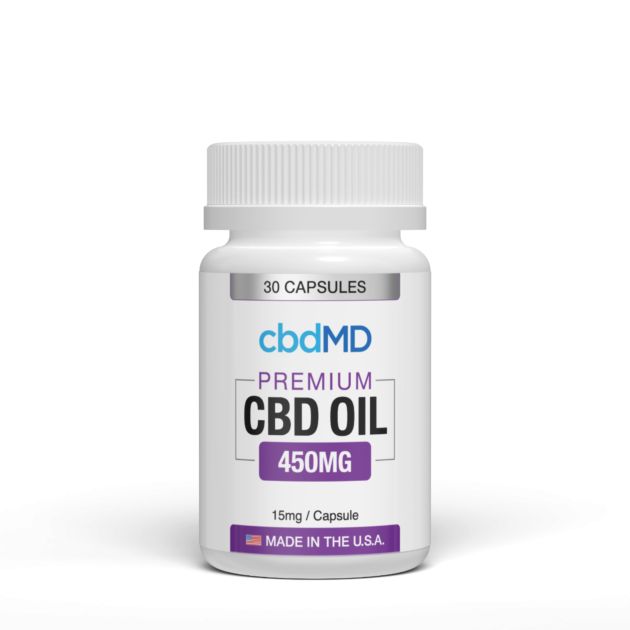 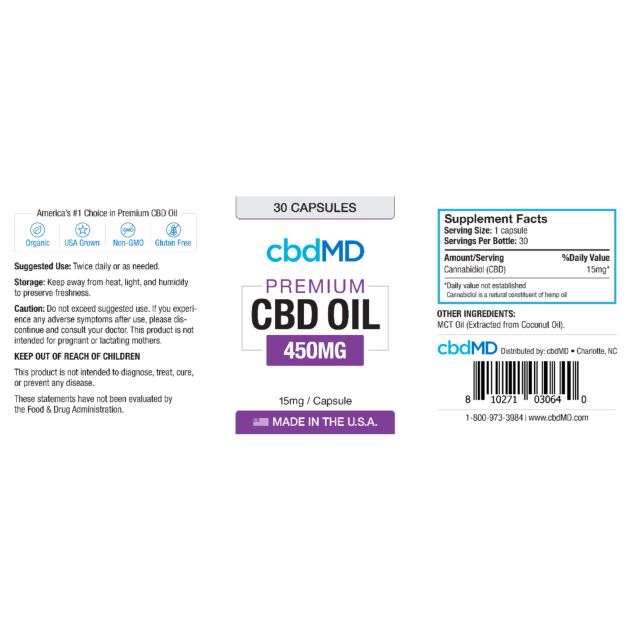 By removing all the guesswork, cbdMD Oil Capsules offer a quick and easy approach to CBD. Our CBD oil is extracted using an innovative, hybrid broad-spectrum technique – this proprietary process creates a true full-plant cannabinoid extract without any risk of contamination from THC. It combines the elements of the purest crystalline CBD isolate with the plant’s other valuable cannabinoids, terpenes, amino acids, and essential oils needed to achieve the infamous “entourage effect”. Each CBD capsule contains an exact concentration making them one of the most efficient and effortless products we offer. We only use 100% organic hemp cultivated on our farm and fully processed at our lab. Our CBD is also non-GMO and gluten-free.

Whether you’re a business professional or a professional athlete, always make sure your CBD oil contains zero THC. Although 0.3% THC is the legal limit in the United States, trace amounts could still produce a positive drug test. Our "hybrid broad-spectrum" process combines the absolute purest crystalline CBD isolate with a controlled broad-spectrum extract to carefully prevent the introduction of any THC. This is the only way to ensure a premium full-plant cannabinoid extract capable of producing the infamous “entourage effect” without any risk of THC.

How much to take?

With everyone’s body make-up being entirely unique, it’s impossible to pinpoint a specific concentration of CBD that will work the same across the board. It’s also important to remember that both symptoms and desired results will cause the dosage to vary as well. A specific concentration of CBD might produce decent results for some but superior results for others. That being said, if this is your first introduction to CBD, you’re probably wondering exactly how much to take?

For the first four days, many individuals start by taking one serving of their daily dosage in the morning and then another in the evening.

WORKED WELL, BUT TAKEN AT BEDTIME CAUSED INSOMNIA. I bought this to try for pain in the hands from both arthritis and a cervical radiculopathy, particularly at night. The first two times I took it at bedtime I woke up constantly all through the night. I had expected it to help with sleep. However it was surprisingly good for the pain. It turns out that low doses of CBD can cause activation, not sedation. (see below) Now I take a capsule every morning, and about 90 minutes later get impressive decrease in radicular pain and arthritis pain lasting 8-10 hrs. This capsule had 15 mg of CBD per dose which is in the range reported (below) to cause activation.

CBD and Sleep
But what about CBD’s effects on sleep and wakefulness? The answer is more difficult to pin down than you might imagine.

In animal studies, varying doses of CBD have been administered, often directly into specific areas of the brain. A fairly well-documented pattern emerges: CBD’s effects on the sleep-wake cycle are biphasic.

In other words, CBD appears to have opposite effects on sleep, depending on the dosage administered.

The “total percentage of sleep” increased significantly among rats given the higher doses, according to a 2013 study published in the Journal of Psychopharmacology.

However, in a 2006 study, rats that were given microdoses of CBD spent less time asleep and more time awake during the test period.

Even relatively lower doses (160 mg/day) were linked to more time spent sleeping among volunteers who complained of an inability to fall asleep or to remain asleep.

In the study, those who received CBD reported sleeping longer, with fewer periods of wakefulness or restlessness. CBD use also appeared to impact dream recall, but subjects reported no feelings of “hangover” the following day.

The decline in dream recall appears to reflect a possible reduction in time spent in REM sleep; the stage of sleep associated with dreaming.

It is perhaps for this reason that CBD has been associated with relief from nightmares among people suffering from PTSD.

Conversely, when CBD is given in low doses (15 mg/day or less) or in combination with THC, subjects typically report feeling more stimulated rather than drowsy.

In essence, these studies suggest that humans react to CBD much like other mammals do: At low doses CBD is stimulating; at high doses it is sedating.

If anything, according to a 2004 study conducted using human volunteers, THC causes feelings of drowsiness, not CBD. In that study, 15 mg of THC had sedative effects when administered one hour before bedtime. In contrast, 15 mg of CBD appeared to have “alerting properties”. And when given together, CBD appeared to counteract some of the “residual sedative activities” of THC. 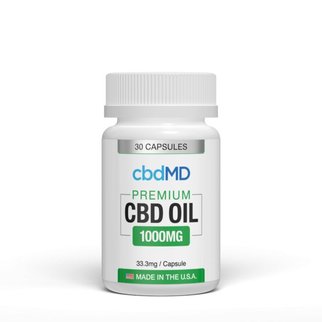 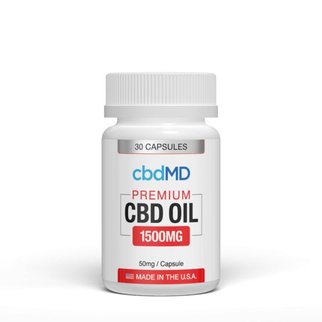 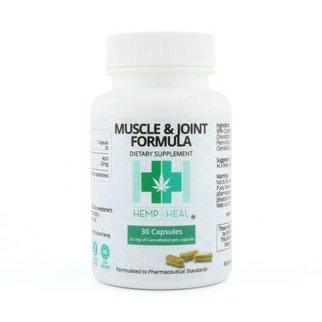